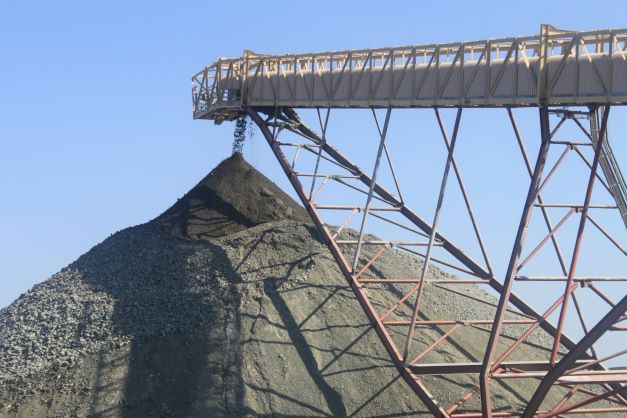 Diamond mining at De Beer's Voorspoed mine before it closed down. The processing plant will come under the hammer soon. Image credit: WhyAfrica

06 July 2021 – One of the most efficient diamond processing plants in South Africa will come under the hammer soon when Aucor Auctioneers closes the bid to sell the entire plant once used at the now defunct Voorspoed diamond mine.

Voorspoed was one of diamond giant De Beer’s flagship projects at the time. Construction of the R1.3-billion project got underway in February 2007 and De Beers started sorting diamonds in 2008. Ramp-up activities began in July 2008.

German engineering company Polysius, a subsidiary of well-known ThyssenKrupp Technologies, was commissioned to supply the equipment in 2008. The plant operated optimally at full tilt for a little more than 10 years, until De Beer’s decided to either sell Voorspoed to smaller operators, or to close shop in 2018.

The company estimated in its initial feasibility study that the Life of Mine (LoM) at Voorspoed would not exceed 16 years. The processing plant was designed and constructed according to those specifications. However, after ten years it became increasingly difficult for the mining team to extract high-quality gems from the Kimberlite in the open pit, and the mine closed shop when there was no interest to continue mining at Voorspoed.

Two types of tuffisitic kimberlite breccia, along with seven varieties of hypabyssal facies kimberlite, were identified through early drilling. At full capacity, the mine produced 800,000 carats per year.

The plant was fed by material mined from an open pit between 360m and 420m deep. Voorspoed used standard drill and blast techniques and the crushed material was transferred into haul trucks and transported to the primary crusher system. The initially crushed ore was sent to a secondary crusher and later stockpiled.

At the outset Polysius opted for a high-pressure grinding roll and a scrubber for desaaglomeration. The equipment separated diamonds from the Kimberlite through inter-particle crushing.

The plant consisted of 10 sections namely a primary crushing and screening section, recovery, FRP, a Dense Media Separation plant, secondary crushing and screening, degritting and thickening, scrubbing, tertiary crushing, CRD and water reticulation. All these sections will be auctioned off. On-line bidding has already started and the last day is the 15th of July 2021. The starting bid for the full plant was R8-million and all indications are that the final bid will end a lot higher as several diamond operations in Africa might be interested.

For more detailed information about the Voorspoed auction follow these links:

Although Covid-19 has made it difficult for auctioneers, Aucor, established in 1968, has thrived in a new digital world. Their online auctions have been extremely successful, and they have a number of exciting events lined up for the next few months, including Sishen, Kolomela and Beeshoek in the Northern Cape. Aucor’s website is one of the best places to go searching for the highest quality refurbished mining equipment in town.

Another piece of equipment that will go under the hammer soon is the De Beers/Barlows Double Drum Winder, which goes on auction on 3 August 2021 with bidding to close on 5 August 2021.

De Beers is in possession of a 16ft double drum, direct drive AC winder which is currently for sale.

The 4.55m diameter x 1.83 m width double drum winder was manufactured by Barlows and installed at the South Deep ventilation shaft in 1995. Initially it serviced the 2960m deep shaft as a kibble winder during the sinking phase and then from March 2011 as a man and material winder.

The Barlows mechanical drum design is based on a heavy duty bolted construction with each drum installed with a three-part clutch system. The drum barrel consists of two halves bolted together having a single stiffener ring in the middle of the barrel. The barrel is connected to the drum cheeks with an axial bolted connection.

The 660 mm nominal diameter drum shaft was designed to accommodate a direct drive through shaft motor with an outboard bearing support. The winder was originally fitted with a 3400kW, 58.4rpm Toshiba DC Motor fitted with a Ward Leonard control system supplied by Actom.

The winder has the following design parameters:

The winder’s mechanical components were fully refurbished by Winder Controls South Africa. Full compliance to Anglo American was a requirement. The total electrical portion including the motor has been replaced with a 2200kW, 34.5rpm TMEIC AC Synchronous Induction Motor controlled by a TMdrive-70 IEGT vector controlled 3 Level inverter. The fixed shoe brake rigging was retained for duty at De Beers’ Venetia diamond mine; however, the brake control was replaced with a current era ESCORT semi closed loop control. The winder is designed to be fully automatic handling a payload of 18t. for the full specs on the winder see https://bit.ly/3fh07VC