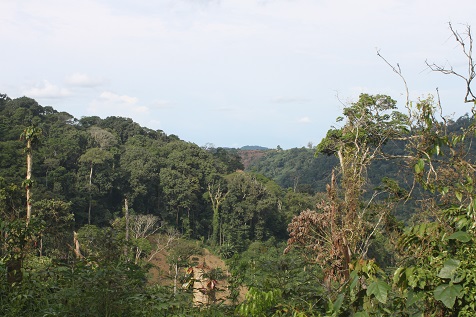 A view from Bisie Hill, where Alphamin is developing Bisie, the richest tin mine in Africa Image credit: WhyAfrica

The article was first published by Core Consultants on www.coreconsultants.org

09 September 2020 – Alphamin Resources’ is the only company that has delivered on its promises to develop a top tin mine in Africa, and their ore body continues growing.

Mining tin in Africa will not be a conversation starter prior to ordering the main meal at Augustine’s on Wall Street. It will, however, be a showstopper just before starters at Bucks of Woodside in Silicon Valley. A brief mention of tin’s current value, and the importance of tin for future technologies, and most techies will forget about their California crab cakes. To stir the pot further mumble something about lithium batteries, the DRC and the Bisie tin mine, just before the tomato burrata arrives, and you will instantly have an audience.

That is because tin is part of many over-breakfast Silicon Valley conversations about electric vehicles, lithium-ion batteries, touch screens and microchips. If Africa, and especially the Democratic Republic of the Congo (DRC), is not part of these early morning, high-level chit-chats, the pundits are missing a trick. Africa is blessed with an abundance of metal deposits that would be in demand for the next 50 years. The trick is not so much where to go and look for these big elephants, but how to access the ore bodies, and then develop and deliver them to the market.

Tin is set to be one of the metals most impacted by future technologies, and with supply dwindling due to a double whammy of Covid-19 and long-term declining grades, new sources of tin needs to be found. Although tin occurs throughout the world (it is mined in more than 35 countries), large cassiterite deposits are often locked up in inaccessible, high risk or remote regions of Russia, Africa, Mongolia, and Australia. Moreover, most of these deposits are low-grade and it is not viable to develop these ore bodies at current tin prices with current mining and processing technology.

Alphamin delivers on its promises

Good cassiterite deposits are abundant in Africa, and the continent has a long history of tin production. But other than historical large-scale mines in South Africa and Namibia (of which most have closed shop) tin production, in the past, has been limited to small-scale and artisanal workings. That is until Alphamin started mining the spectacular, high-grade Bisie deposit close to Walikale in the eastern parts of the DRC a little more than a year and a half ago. Alphamin, though, has not been alone in the search for Africa’s tin jackpot. A host of deposits have been discovered but building a mine in remote Africa is not for the faint hearted. Apart from Alphamin in the DRC, and Afritin in Namibia, not one other junior mining company in Africa could deliver on its promises to progress what they all refer to as the “biggest tin discovery in Africa”.

At current levels, the rising tin price is a boon for operating mines like Bisie. But greenfield tin projects will require more than the proverbial 440 tonnes of SpaceX rocket fuel to take off. More so in unstable and fragile regions of Africa. Not that there is a shortage of launchpad’s, rather because there is a lack of will and a dearth of capital. Its extraordinary geology means Africa is replete with scatterings of cassiterite, pegmatites, lithium, cobalt, and tin. Although the continent has almost doubled production of tin-in-concentrate from 2015 to now, more than half of all African production is still extracted by artisanal methods. These mine workings have little in the way of resource estimates. It is therefore difficult to estimate exactly how long tin resources will last for, but it is likely to be greater than the 40-year estimate based on the available data.

Nonetheless, there are some big elephants yet to be discovered. That these deposits will be of the same quality and as high-grade as Bisie’s Mpama North, or that there is a slight possibility that they might even underlie Mpama North, is a matter of discussion for another day. What is known though, is that the ore body at Bisie’s Mpama South, is possibly comparable in size to Mpama North. But while exploration drilling is still ongoing, nobody really knows what awaits Alphamin’s geologists in their quest to discover the full extent of the greatest tin deposit on earth. Others are trying, but Covid-19 has put a spoke in the wheel. Some have tried and failed even before the Coronavirus put fear in the hearts of even the most intrepid exploration outfit.

More tin in the DRC and Africa

Before the onset of Covid-19 Australian company AVZ Minerals was aiming to bring the Manono project, with a resource of more than 220kt of contained tin, in the Katanga province of the DRC, into production before the end of 2021, but with the world’s markets in shambles after Covid-19, AVZ has not been overly vocal about their plans. However, it is a project to follow with interest. The Kibaran pegmatite belt that runs through Rwanda, Uganda, and the DRC, could be prolific if explored to its full potential. The Kalima area, the Yubuli deposit and Atondo open pit mine (even after decades of exploitation), all in the Maniema province of the DRC, has been and will continue to be an important source of cassiterite production.

The three big unknowns are Rwanda, Nigeria, and Uganda. Due to mainly artisanal workings, resource estimates in Rwanda are few and far between.

Tin mining has been a staple in Nigeria for hundreds of years, but most of this is in the form of small-scall and artisanal mining. As such, there are no CRIRSCO-compliant resources or reserves in the country. Non-complaint resources total some 65kt, although none can be classified as reserves. Some works estimate national reserves on the scale of 300kt.

Both Egypt and Morocco are home to large tin projects – Abu Dabbab and Achmmach, respectively. Achmmach was being developed by ASX listed Kasbah Resources and has a complaint reserves of 58kt, but has currently stalled. Achmmach is a large deposit, but the grades are low. Kasbah’s plans were to start producing at Achmmach three or four years ago and it is not sure what is causing the delay. Proposed changes to the Egyptian mining laws could see exploration return to Abu Dabbab in the future. Somalia and Burundi have some artisanal mining activity and minor reported resources of less than 2.7kt while Zimbabwe’s historical Kamativi mine still holds over 120kt of tin as a non-compliant resource in the ground and in historical tailings dumps. South Africa still has several good deposits but at an extremely low grade, and only an exceptional bull run in the tin price will bring these historic operations back into production.

Meanwhile, Alphamin has beefed up its exploration budget at Bisie and drilling is underway at Mpama South. In addition, plans are in the pipeline to start drilling underground extensions at Mpama North. Geologists know Alphamin is onto something big at Bisie. The question is: just how big is Bisie? Whether there will ever be a richer tin deposit in the world, is something to ask over desert, whether dining in Wall Street or Silicon Valley. There are many large elephants waiting to be discovered across Africa. The eastern parts of the DRC forest hide most of them, including lithium, copper, and cobalt. Alphamin has a significant head-start in the North Kivu province, and has incredible knowledge about the operating environment and communities in the Congo Basin. They built one of the top tin mines in the world from scratch in one of the most challenging environments on earth. Now, with Bisie producing steadily and delivering the exceptional high-grade tin that they said they would, it will do no harm to contemplate their plans as you pass around the box of Partagas cigars.

Just before the waiter brings the digestifs, it might be worth mentioning that Alphamin could be looking for even bigger elephants in the African jungle. They delivered on their promise once, didn’t they? The knock-out line, soon after night-caps, is that they might have the appetite to do it again.