African tin producers hit the straps in a perfect storm 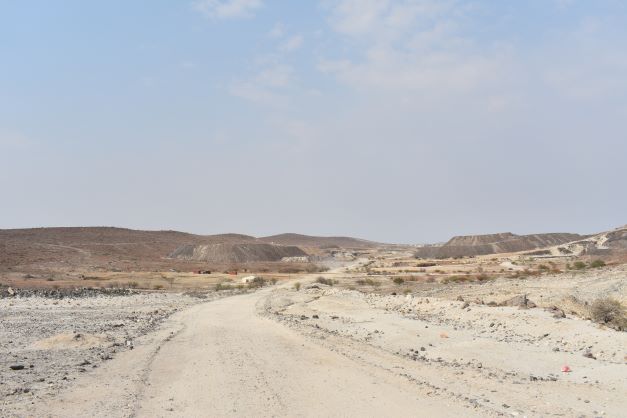 AfriTin’s Uis mine in Namibia with the onset of construction in 2019. Image credit: Leon Louw for WhyAfrica

African tin producers hit the straps in a perfect storm

Tin mines in Africa continued producing the goods at a time when the rest of the world buckled under the strain of covid-19 restrictions, writes Leon Louw owner and editor of WhyAfrica.

While most of the world’s trade and production ground to a virtual halt during the dreary two years of covid-19 restrictions and travel bans, the mining industry continued grinding it out under an extremely challenging environment. The biggest winners during this time were arguably the African tin producers, who rode the wave of a buoyed tin price and upped the ante just at the right time.

Mines like Alphamin Resources’ Bisie in the North Kivu Province of the Democratic Republic of the Congo (DRC), and AfriTin’s Uis operation in Namibia benefited immensely from a lacklustre and at times hapless global tin market. A drop in supply, especially from the largest producers in China, Malaysia, and Myanmar, resulted in a ballooning tin price, which continues its upward trend. At the same time last year, the price of tin was hovering around USD22,455. One year later it has broken through the USD43, 000 per tonne barrier.

Not only the tin price gave the African mines a boost. As the Asian producers put operations on hold while covid-19 ravaged their workforce, several smelters, especially in Myanmar, turned to remote Africa (less affected by the global pandemic) to import tin concentrate.

In what can only be described as the perfect storm, Alphamin and AfriTin hit the straps in 2021 at the right time, and both reported record production during the second year of the covid-19 scourge.

Bisie reported contained tin production of 3,114 tons for the last quarter of 2021, which is 10% above the previous quarter. In addition, improved underground mining practices relating to stope planning, delineation and blasting resulted in better grade control with an average tin grade of 3,8% processed during the five months ended December 2021. Alphamin produces 4% of global tin production and is one of the highest-grade tin mines in the world.

But even more encouraging is that Alphamin’s recent exploration programme at both its Mpama North and Mpama South deposits have delivered spectacular results.

The company has been drilling multiple targets along the Bisie ridge to expand its resource base. This includes the Mpama South deposit, which lies roughly 1km from the existing mine at surface. However, new results indicate that the two deposits may be closer than previously thought.

Alphamin has drilled 89 holes into Mpama South and is currently visually appraising the drill core before it is sent to be assayed. According to the company’s geologists, cassiterite mineralisation is visible in intercepts just 85m to the south of Mpama North mine. These results are yet to be confirmed by chemical assays, but there is already evidence of extremely high-grade tin mineralisation in the deposit.

Alphamin has also continued drilling at Mpama North to extend the mineralisation at the existing operation. On top of the work being done at Mpama North and South, drilling has begun on the first of six high priority targets further down the Bisie ridge.

Assay results to date indicate an average grade of 2.9% tin (Sn) at Mpama South. This will be confirmed in the Maiden Mineral Resource estimate, which is expected to be released later this month, but a result around this number puts Mpama South near the top of the highest-grade undeveloped tin projects globally.

AfriTin Mining has been operating its Uis tin mine in Namibia since late 2019, but results from the most recent quarter (Quarter 3 [Q3], financial year 2021-22) represent its best to date.

As a result of these improvements, 220 tonnes of tin concentrate were produced during the quarter, containing 136 tonnes of tin metal. This was 20% higher than in the previous quarter, more than 25% above nameplate capacity of 108 tonnes of tin-in-concentrate, setting a new record for the mine.

The previous peak in output was in the final quarter of the 2020-21 financial year when 126 tonnes of tin-in-concentrate were produced.

Looking ahead, AfriTin is progressing well with its Phase 1 Expansion project. The work aims to increase tin concentrate production by 67% from current nameplate levels of 720 tonnes per year. According to a recent statement by AfriTin, construction and commissioning of the expanded plant is on track to be completed in Q2 2022.

According to the International Tin Association this quarter represents AfriTin‘s strongest to date. “Although part of the boost was due to temporary higher tin grades – which are expected to revert to the mean in the future – improved plant availability and processing rates were key contributors, meaning that AfriTin is now exceeding its forecast maximum capacity. The reduced operating costs compared to the achieved tin price of USD39,025/tonne indicates significant revenue generation.”

WhyAfrica provides you with business intelligence that matters. Africa is our business, and we want it to be yours too. To subscribe to WhyAfrica’s free newsletter or digital magazine, and for more news on Africa, visit the website at www.whyafrica.co.za or send a direct message. WhyAfrica launched its first ever digital magazine in November 2021. The company will undertake a road trip through South Africa, Namibia, Zambia and Botswana in June and July 2022. If you are interested in sponsorship or advertising opportunities, please contact me at leon@whyafrica.co.za. We have a wide range of different packages and combo deals to give your company the greatest exposure to a rapidly growing, African readership.